The brambles have bounced back nicely from last year’s drought with pink blooms beckoning pollinators of all kinds. It won’t be long before we’ll have to dust off that blackberry cobbler recipe. 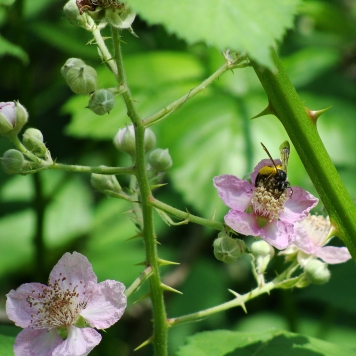 “It is rather for us to be here dedicated to the great task remaining before us— that from these honored dead we take increased devotion to that cause for which they gave the last full measure of devotion — that we here highly resolve that these dead shall not have died in vain — that this nation, under God, shall have a new birth of freedom — and that government of the people, by the people, for the people, shall not perish from the earth.” — Abraham Lincoln.

It’s that time of year again. The sound of “chip, chip, chip,” followed a series of thunks and talon scratchings against the front door and the bedroom windows. Claudia Cardinal(e) is back defending her territory to the south and the Mr. Indigo Bunting is doing the same on the north side of the house. 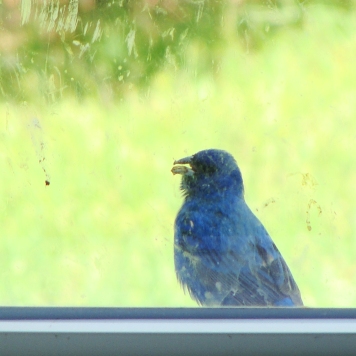 Of course, these are not truly black and white, having been shot in living RGB on digital point n’ shoot. When framing a shot for eventual conversion to black and white, or specifically infrared-ish, there is still the challenge of evaluating the color and contrast in the viewfinder and filtering it through your brain, hoping the resulting image will match your ambitions.

The first lesson I had in this area was in the pre-digital days. As wire editor for a newspaper chain, I’d watch as The Associated Press LaserPhoto machine spit out, on a special paper, color photos as color separations. There were four images for each photo and though they were black and white, each represented the yellow, black, cyan and magenta components of a full-color image.  When aligned correctly and run through a four-color press, magically, a full color image would appear.

When shooting through an RGB device, your imagination has to substitute for those CMYK separations — taking it a step further and using only three mental filters, red, green and blue.  Of course, if your image doesn’t meet your ambitions, there’s probably a fix in Photoshop.

This was originally shot for this weekend’s In the Background photo challenge, aiming for a little bird in a tree in the background. Once downloaded, the clouds just leapt from the frame.

This fellow likes to find the highest branches in which to sing his songs.

Uh oh! Less than 10 percent of our space left in WordPress. Time for an upgrade.

Mourning dove and his shadow, made pseudo-stereoscopic by some dang-it-why-didn’t-I-do-this-right-the-first-time Photoshoppery.

Sunburn, bratwurst and what sounded like very large, very angry bees all added up to Sunday of being smitten by the motor sports bug.  It was a blast watching drivers of all skill levels and cars of all wallet sizes careen around orange cones in the parking lot of War Memorial Stadium  trying to best their last timed lap.

There were daily drivers — sedans and station wagons with blue masking tape numbers on the side. There were other vehicles whose owners had invested in high-end engines, exhausts, spoilers, paint jobs and other modifications.  The atmosphere was very laid back, and if there were any drivers’ excuses, we were too far away to hear them.

The autocross was put on by the Sports Car Club of America’s Arkansas affiliate. Maybe some day we’ll get to see the race from inside the windshield.

Nature continues to be generous on the mountain. 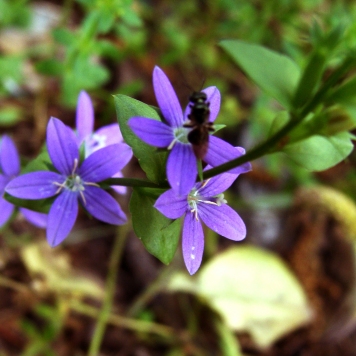 Tight shot of the center of an evening primrose bloom.
34.770203 -92.519793
Reaching for a ladle from the pot rack  to make some weekend breakfast crepes.
OK, we don’t normally cook with a camera in hand, but sometimes sacrifices must be made for art. (Tongue firmly in cheek!)

“If I could just make it over the top of this rock … escape is in sight!” — Quoth the spiny caterpillar.

Thanks to our friendly neighborhood extension urban entomologist for the ID on this fellow and his kin:  the Eastern Buck moth, Hemileuca maia.