Just a few days before the summer solstice, the slowly setting sun gave light to the breath rising from the trees below. 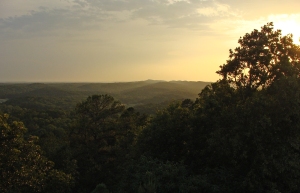 Twenty minutes in the brambles, 15 minutes prep time and 45 minutes in the oven. The cobbler, with its lemon poppyseed top, was well worth the chigger bites and scratches earned wading into the blackberry patch.

They look cute with their big dark eyes and their wee tiny feet, but make no mistake, hummingbirds are ruthless when it comes to protecting “their” feeder. Normally, it’s Napoleon or some other dominant hummingbird who chases the others away, but this morning, a big red wasp had succeeded in turning the pecking order on its head. The wasp aggressively chased off every feathered rival, including Napoleon, at both feeding stations. The wasp met its match in the form of a flyswatter. It managed one comeback, but hasn’t been seen after a second strike.

While sipping our morning tea and coffee on the deck, rapt in the aerial battles of the hummingbird populations just inches away, this eastern bluebird gained the high ground — briefly.

Two random objects, a sprinkler and a wild grass seed panicle, united by two things: 1) they represent different facets of our current near-drought and 2) their graceful arc.

Derided as weeds in many places, thistles can be quite both brightly charming and an effective biological weapon of sorts.

The Scots adopted the thistle as a national symbol in the 13th century thanks to the role they played in thwarting a Viking attack.  As the story goes, a party of raiding Norsemen removed their shoes, hoping to launch a silent attack on the sleeping Scots.  Running aground on the land urchins, the Norsemen’s howls awoke the Scots, who defeated them.

With summer solstice just around the corner, corn should be getting ready to tassel. Never having grown corn before, thought this year, we’d toss a few seeds in the ground and make a go of it.  The corn came up, and while it’s certainly not high as an elephant’s eye, it may struggle to knee high by the Fourth of July. That’s provided that that the rich variety of grasshoppers and hungry deer don’t get to it first. A look at our corn as of June 18:

The local lizards enjoy the warm sunny days and the warm bricks and rocks of the Arkansas Ouachitas.

Summer’s pop-up thunderstorms can be spectacular, whether you’re under the cloud watching its power or scores of miles away watching the cloud expand and evolve with convection and eventual dissipation. This June 15 storm was apparently a favorite for photographers. KARK had many viewer photos of this storm from different parts of Arkansas.