Single green anole seeks female for whatever it is lizards do in the spring.

An aging Yukon Gold potato shows its wilder side.

Wish this story had a happy ending.

A glimpse of blue revealed by the tilt of a bird’s nest was eye-grabbing. Seeing that mom was not there, I raised the lens above my head and on tip-toe grabbed a photo.

However, once the photos were opened on a bigger screen, the real story became clear. These eggs had come to a bad end. They were cracked open on top and their precious payload dead. The top photo had been taken with a phone, and I returned the next day to get a better photo with a camera.

The previous night’s violent thunderstorm had knocked the nest out of the tree. On the ground, still holding its wet and empty shells, the nest was now filled with scurrying pill bugs.

The squirrels on the UA-Little Rock campus are used to people — hundreds of people — tromping past at any particular time of day.

Generally, however, they will hop away to maintain a safe distance should a human make too close an approach. Not so with one squirrel, who was intent on a strange activity — stripping bark from a cypress tree. The squirrel hopped down, ripped up a mouthful of mulch, then hopped back up the tree (mouth empty) to begin ripping and stripping again.

I have a query in to our local extension wildlife and forestry specialists about this odd behavior. It’s been noted elsewhere, according to the Internet Center for Wildlife Damage Management. There are multiple theories for this behavior, such as the need for nutrients or water. (this spring, however, there is no shortage of either for  this scholarly squirrel). Reason 5 may be the most accurate:  “We may never have a complete understanding of why bark-stripping occurs.”

Spring has finally loosed all its charms here in the Arkansas Ouachitas. Even the dogwoods have caught up — blooming just in time for Easter. 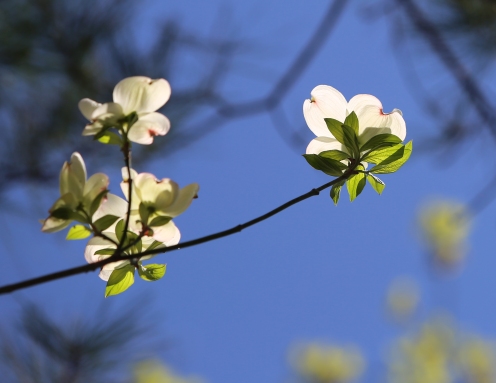 THREE BLOOMS — Wild dogwoods dot the Ouachita Mountains, with sprinkles of white in the understory.

Black and white warbler singing his songs in the Arkansas Ouachitas this morning.

As much as we hate getting up early on the weekend, the bright moon beamed its own wakeup call through the unshaded window just before 5 a.m.  — just in time for us to see the show. And what a show it was!  The composite below begins at 5:21 a.m. CDT and the last frame was taken at 6:07 a.m., just as the sun was rising.  The full eclipse was too faint to see in the dawn-bright sky.