In contrast to the monochromes of our  last post and today’s Isaac-leaden skies, here are two shots with a little more color.

Wild grape tentacles steady the vine as it threads through the limbs of a pine tree. 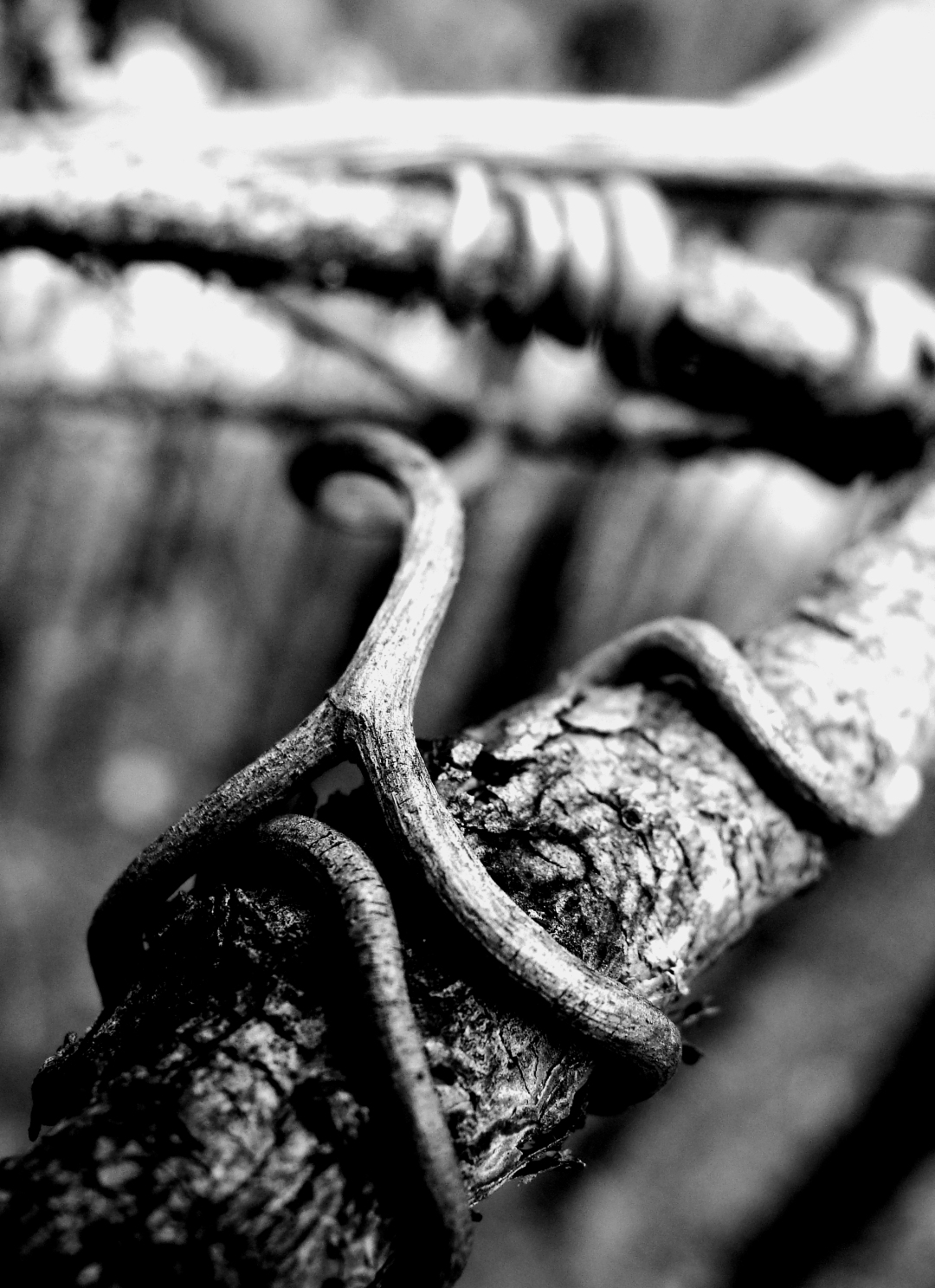 Arkansas 291 winds across beautiful rolling country that’s home to ranch and forest land in Grant County, south of Little Rock. It’s a place where straightforward talk is expected.  Apparently this applies to the highway signs too.

Built in 1931, the ballpark that would be known as Ray Winder Field hosted generations of Arkansas Travelers fans out to see the “Greatest Game on Dirt.” It was creaky and leaky and as friendly a professional baseball experience as one could want. Ray Winder was a place to see folks like Bernard Gilkey, Ray Lankford, Geronimo Pena and Mike Perez before they moved up to the majors.

Ray Winder Field was more than just great AA ball. It was a place to see the late Max Patkin, the clown prince of baseball; or to watch kids and adults race Shelly, the Travs’ mascot, around the bases. And of course, who could forget The Puffy Taco Man mascot when the San Antonio Missions were in town?

Then there were the regulars: sportscaster and all-around nice guy Jim Elder, Alfreda Wilson, who for 35 seasons rallied fans and players with her organ playing; and of course, former General Manager Bill Valentine. A former major league umpire, Valentine is one of those larger-than-life people who lent Ray Winder Field more of the character that made it such a welcome place for fans and families in Little Rock.

The Travs played their last game in Ray Winder in 2006, moving to a shiny league-spec venue across the Arkansas River in North Little Rock. There was much wrangling over what to do with the old field. One proposal called for it to become a new elephant enclosure for the neighboring Little Rock Zoo. Another called for it to become a parking lot for the University of Arkansas (for) Medical Sciences. Its fate was sealed when the City of Little Rock sold the park  to UAMS for $1.3 million.

Just curious, or nosy, and definitely not being scientific, but have to ask:

(Of course this could be done in a poll, but the comments section offers more flexibility in answers.)

Look forward to hearing from you!

The spell of desperately hot, dry 100-degree days has been broken by a couple of cold fronts, bringing rain and temps in the 70s and 80s. When the rain finally stopped, wildlife emerged; deer wandering the woods and a young hognose warming himself on the stones lining the driveway. Hognoses wear an enormous variety of colors and have a very unique set of defensive behaviors that include, at one end, playing dead. At the other end of the spectrum is its cobra-like threat that has earned it the nickname “puff adder.”

There is something lovely and delicate, yet so primitive about dragonflies.  Oh to see one of their Permian ancestors, the meganeura, with their 2-foot wingspans. Today’s dragonflies happily dine on mosquitoes.  Considering their non-vegetarian leanings, perhaps it’s best the meganeura are admired from a safe distance in time.

Last week, cousin Chooman  made the three-hour trip out of Bangkok to the Uthai Thani province to hear the preaching of a revered Buddhist teacher — one who not only taught her to meditate, but also her mother and late father. That journey, in a way, is a facet of this week’s theme. After all, what is a pilgrimage but a merging of belief and action?

Other Merges:
More than black and white

And the mother page: http://dailypost.wordpress.com/2012/08/17/weekly-photo-challenge-merge/

Random midweek thought: If it’s older than dirt, is it ante-matter?

The rather violent movement in the formidable pokeweed downslope from the house caught our eye and camera. The resulting shot made us think of  Michael Martin Murphey’s mid-70s hit  “Carolina in the Pines.”  Except, it’s more like “Pileated in the Poke,” just not as melodic.