A few tense moments during blue gill spawning season in Coleman Creek as a small diamondback water snake goes head to head with a male fish protecting his nest. The snake eventually moved away. Each of those round depressions filled with gravel is a nest. Taken 10 May 2017.

Boundaries are this week’s WordPress Photo Challenge. Below, lichens set out dark, circular boundaries atop a stone, and in the bottom photo, a wall seems to keep the snake on the wild side of the bricks. (In reality, he often uses the drainage holes to visit the house side and explore the garage.)

We know living where we do that venomous snakes are just part of the package. We’ve seen or heard copperheads and diamondbacks on occasion, but not in our yard. Not ’til a couple of weeks ago that is. We know we have snake burrows under the front porch which house nonvenomous long Eastern coachwhips and hognose snakes. So looking down off the deck, there was a new snakeskin pattern coiled in the grass. “Hey!” I yelled to my husband. “We’ve got a new snake and I think he’s venomous!” He spotted the rattle — and right then we had our first timber rattler — or at least the first one we know of.

Our first snake sighting — at least of one near the house — happened on Wednesday.  A little water snake warming himself on the concrete road  that runs near the neighborhood pond. We just missed running him over and stopped the car to get out and my husband moved him to a safer location. He wan’t terribly appreciative of the gesture and lunged at the air near my husband’s legs. (After getting home, we had to looked him up be sure he wasn’t a copperhead.)

The sighting was to the day we posted last year’s “Opening day for snake season. And two years to the day after posting “Snakes in the garden.” At least our neighborhood snakes seem to be consistent.

This week’s challenge is “pattern.” Nature always provides her share. 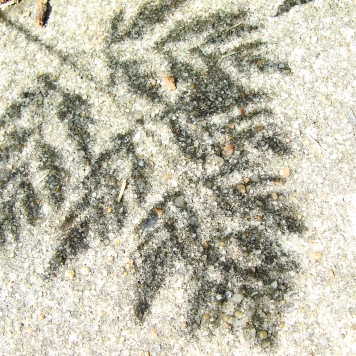 Shadow of a leaf. 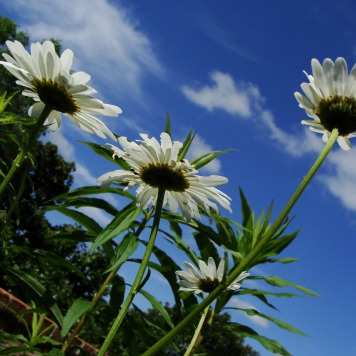 A radial pattern is visible in the petals of these oxeye daisies, a native Arkansas flower.

Repeating pattern of scales in a snakeskin found this morning. Probably from the snake featured in last week’s challenge. https://suburbanferndaleark.wordpress.com/2013/05/05/weekly-photo-challenge-from-above-2/

Alternating leaves form a pattern in these fern fronds. 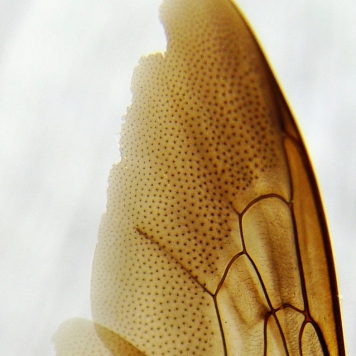 Pattern of tiny dots in the wing of a carpenter bee.

Symmetry/radial pattern is apparent in this wolf spider.

More patterns can be found here:

And of course, the main challenge page:

The larger of the two eastern coachwhip snakes to show themselves today had milky eye scales — a sign he’s getting ready to shed his skin. This fellow curled himself in a warm stone and dirt hollow in the hillside. Only noticed him when I heard the sound of his scales sliding against the stone after trimming some of the growth on the hill.

Someone else in the burrow apparently shed within the last 24 hours. Found a still-moist whole skin measuring more than 6 feet woven between the stalks of the pokeweed plants.

Yesterday was opening day for snake season in our part of the Arkansas Ouachita Mountains. This little ring-necked snake was just outside the front door when we got home from work.

A few days after we gathered the really big snakeskin, a second one, which may have been even longer, appeared, threaded through the bases of a big poke sallet plant. However, the 100-degree heat had cooked the skin into becoming too fragile to recover, and so it remained.

Looking down from the deck yesterday, we spotted a chipmunk rustling around in the rocks and grass, figuring he was nosing around for seeds. It was shocking to see the little guy grabbing the snakeskin and chew on it. We never thought of chipmunks as being anything other than cute little acorn-nibblin’ vegetarians, but we now know them to be omnivorous.

The chipmunks in our little part of the Ouachitas have fared quite well this year, including a giant, almost rat-sized one with a crooked tail that we’ve named “Leadbelly.” (no photos yet.)

We often peer down from the deck, in hopes of catching a glimpse our under-porch neighbors enjoying the sun. While we didn’t see our serpentine neighbors today, we did find they’d left us yet another beautiful gift.  And unlike last month’s find, this summer solstice present was complete, including head, eye scales and lower jaw. The former owner was much more slender and quite a bit longer: 6 feet and counting.

More of our local reptiles showed themselves on April Fool’s Day. The long coachwhip stuck his head, and a few inches, out from under the porch and a big fence lizard made himself at home on the deck.