Between creating graphics for a PowerPoint,  saw this incredible panorama of clouds, light and rain.

The Ouachitas got a little bit of rain over the last couple of days. This morning, the clouds parted perhaps long enough for the Easter sunrise service down by the Arkansas River, but it wasn’t long before the dark  stormclouds were again in full throat.  The rain fell so hard at 8 a.m. Mass, the pastor said he could barely hear anything above the din of the drops battering the roof.

During yesterday’s walkabout, water was everywhere from tiny drip-drip-drips from the edge of a stone to white mini-rapids in the deepest part of the valley. 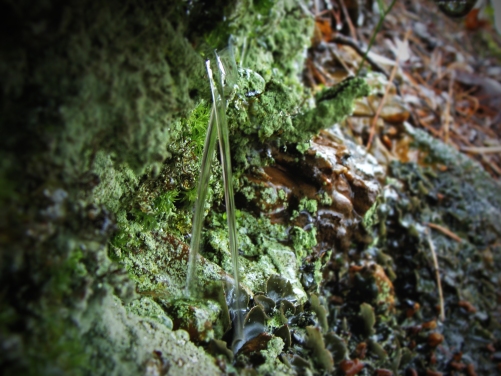 Tiny streams of water fall through the fissures in the shale.

Water comes flying down the mountain, carving the shale as it goes. 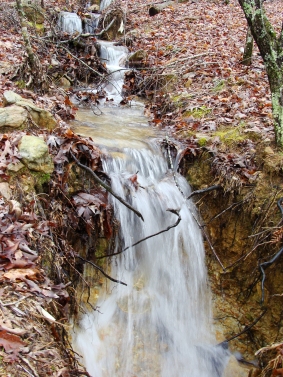 Rain has returned to the Ouachitas, and even the trees look happier and plumper for the moisture that’s soaking into the soil. Arkansas is far from being out of danger, with rainfall for most of the state is running 12 to 16 inches below normal. However, the rain has given the state’s firefighters a much-needed break from wildfires and the rest of us a much-needed break from 100-degree temperatures.

The rain was too late to stop this tree from shutting down and losing its crown. Compare the shot below to one from an earlier post on July 1.

In Arkansas, it seems as if  everything is early this year. Corn planting began in February. The first strawberries, blackberries and raspberries showed up almost a month early in May. All of the row crops are growing two to three weeks ahead of the norm and in some cases, the (irrigated) crops reached key maturity stages so early there was no precedent.

The latest thing to come early is August. August actually showed up the last week of June and September is making a play now that it’s July.  How do we know? Right now, the thermometer is showing triple digits and tree leaves are changing color and falling.  Mercifully, no Halloween decorations or mention of football has yet appeared.

However, Arkansas is in a serious drought. Exhausted fire crews are battling dozens of wildfires every day in 100-110-degree heat. Ranchers with burnt pastures are selling off cattle they can’t feed. Utilities are restricting water usage and Arkansans are being asked to refrain from running tractors, mowers or other vehicles with hot engines through dried up hay meadows and yards, be extra cautious with the barbecue grill, and hardest of all this Independence Day week — not set off fireworks.

Those who do long-term forecasting say the state and much of the southeast may see some relief if El Nino strengthens in the Pacific.

Our thoughts and prayers go out to the people of Colorado where wildfires have destroyed hundreds of homes. More than a dozen other states are also battling wildfires.

This plume emerged from a fire not listed among the controlled burns. We hope the fire is under control.

Tarantulas are beautiful creatures. Because of their round bodies, thick legs and hair, they almost seem cute, in an arachnoidal (is that a word?) way. This little one was on the sidewalk this morning as I made the rounds with the mower and weed whacker. He was about an inch and a quarter in diameter.

Jumping spiders are also cute, with their fuzz and their big eyes, but tarantulas take the cake.

Two random objects, a sprinkler and a wild grass seed panicle, united by two things: 1) they represent different facets of our current near-drought and 2) their graceful arc.